The descendants of Joseph Morton and Jemima Harrel were described by Ruth McClellan in 1978 in Our People of Pike County, Indiana. Family oral history claimed the couple grew up on opposite sides of the NC-VA border. The Morton Virginia ancestors often used the name "Molton." McClellan did not attempt to resolve the ancestry of the Harrels and Mortons.1 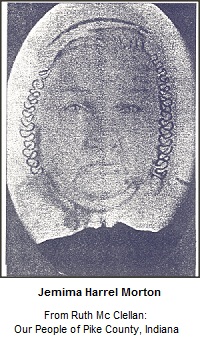 The following discussion follows many different theories about their ancestry. It reaches no conclusions. It is offered here in hopes others may read it and supply some of the missing links.

The marriage of Joseph Morton to Jemima Harrel is the earliest primary record yet found of this family line. Most other records are mere conjecture.

Speculation stemming from the record: Thomas Morton was probably a close relation to Joseph. (Note that Joseph and Jemima named their first son, "Thomas.") The witness, R. Pickens, may or may not, be a relative or friend. The spelling of Jemima's name was as interpreted by the clerk. It implies she used the short form "Harrell" as opposed to "Harrilson/Haralson" used by other related families in the area. Many assume Jemima belongs to this larger family that resided in the Person County vicinity. (See for instance the 1800 census below: in Person County Paul land Ezekiel used "Harrel;" a Major used "Harrilson.")

Unfortunately the area of the NC-VA border at the time of the marriage was riddled with Morton/Molton families. So far no clear record has been found tying Joseph to any specific ancestor. The Mortons seem mainly to track back to immigrant Mortons from Henrico County and Prince Edward County, Virginia. They migrated into what was then called the "South Side" of Virginia in Lunenburg County. Most were prosperous land owners. As Lunenburg divided into smaller counties, many Mortons became land owners in the new Virginia counties of Halifax and Pittsylvania. Some then migrated into Orange County, North Carolina from which Caswell County was created, and subsequently from which Person County was created.

In the above family, *Joseph Morton (b. 1709) son of i. John Morton, is believed to be the "tracker" Joseph Morton mentioned in the Colonial Virginia reference.(He married 1. Goode and 2. [Agnes] Woodson; he died in 1782). He may be a direct ancestor or our subject Joseph Morton through his son Josiah (b. 1737) who married Elizabeth Venable. It is theorized that Joseph and Elizabeth had a son named **Joseph who married a cousin named Mary Morton.

Also in the above family, ***Thomas Morton (b. 1726) son of ii. Thomas Morton, had a son Thomas and daughter, ****Mary. Mary may have been the woman who married her cousin **Joseph Morton above. Thomas, her brother, may have been the person who appears on the marriage bond of Joseph and Jemima Morton.

An alternate ancestry can be perhaps constructed from some Pittsylvania County, VA and Person Co. NC records which might make subject Joseph be the son of *****Joseph who married C. Harrison.

This is, of course theoretical. Please see circumstantial evidence presented below from records of Caswell and Person, Counties NC, as well as Pittsylvania and Halifax Counties VA.

The Morton migration from Henrico County, VA to the "Southside" of Virginia took place in the mid-1700's. The bounty hunter/tracker, Joseph Morton, may have been the forerunner of this migration. (See Colonial Virginia and the Bounty Hunter, Joseph Morton.)

Some Mortons migrated west from North Carolina/Virginia following some of the most famous pioneers into Kentucky. A Morton was killed at Fort Boonesborough (Daniel Boone's settlement in Kentucky) in 1779.4 See Harrodsburg, and with respect to Cumberland Pact in early Kentucky settlements.Use your browser "back" button to return to this page.) Subject Joseph Morton is not known to be directly related to any of these--but perhaps indirectly.

A marriage of Morton Cousins?

It has been stated by some that Joseph Morton was the son of Joseph Morton of Pittsylvania Co. VA and Mary Morton of Caswell Co. NC. Mortons and Brooks are found throughout the early records of these counties. They may have migrated into the region as an extended family group, perhaps including families named Vaughn, Pipes, Crane, Beadles, Robinson, Richardson and others. (Joseph and Jemima's children also married into these families.) Studying the Mortons together with these families may eventually provide the missing records about the parents of Joseph and Jemima.

According to descendants of Jemima Harrell, her immigrant ancestor was a Dutchman, Peter Haralson, who immigrated to VA about 1715, married a woman named "Chambers" in Hanover Co., VA, and died before 1750 in Henrico Co., VA 5

His sons came to the border region between Halifax and Pittsylvania County, VA and (Orange County --which became Caswell County NC after 1750. They bought property and settled on Hico Creek and Marlowe Creek. Some of the subsequent generation adapted the English name, "Harrell". (For a list of Peter's children, see the following at Harrilson Descendants. Many of Jemima's descendants believe her father was Elijah Harrel--but this is based only on a preponderance of evidence--not absolute proof.

Some Harrilson/Harrel researchers, perpetuate the legend that one or more of the Harrell men took Cherokee wives. It was stated by one of Jemima's grandsons that she was part Cherokee. 6 Other descedants claim her father was a companion to Daniel Boone.

A William Henry Harrilson explored Kentucky prior to the Revolution, going with Elisha Walden into Kentucky in 1761. He encamped at "Obey Creek." (Another of Walden's companions, Castleton Brooks, may have been related to a Burgess Harrilson--Jemima's presumed grandfather.) Jemima named a son William Henry Harell Morton--his gravestone is inscribed "William H.H. Morton." Perhaps the noted Long Hunter was a close relation.7

It might even be speculated that her mother or grandmother was a Cherokee woman who married the pioneer and bore him children. This of course is pure fancy. That the name of Jemima's father is the subject of such mystery, lends itself to such theories. (To view discussions of frontier settlements in Kentucky, go to Kentucky)

Regardless of who was the father, evidence suggests that Jemima descended from Burgess Haralson (son of Peter). Some of the records of Orange County prior to the Revolution, Caswell during the wat and Person after show that Elijah Harrel/Harilson was a son of Burgess Harrilson.

The greatest mystery surrounds the identity of Jemima's mother. Some say her maiden name was "Barnett," others, "Brooks." From her will in Kentucky, it is known that Jemima's mother's name [by a later marriage] was "Sarah Vaughn," for Sarah named her daughters Jemima and Drucilla as heirs.

It is usually claimed that Jemima's father was Elijah Harrell--but he does not name her as a child or orphan in his will. In fact, Jemima does not appear as a child in any of the Harrels/Harrilson documents. Furthermore, researchers who claim to descend from Elijah state he married about 1770 and his children were born in the 1770's. Jemima was supposedly born in 1786.

Elijah's will probated 1788-1790 names a Sarah as his widow. But is it conceivable that Sarah, Jemima's mother, was married first to another man, bore Jemima, and then married Elijah Harrel (or some other Harrel) and gave Jemima the Harrell surname?

Or is it possible that Elijah married Sarah Barnette and fathered the sons born in the 1770s--and then remarried--to--Sarah Brooks (who had a daughter Jemima) before his death in 1788?

The question of Jemima's birth date: According to all records pertaining to Jemima's age (census, gravestone) she was born Oct. 27, 1786. Therefore she was barely fifteen years old when she married. At that time and place she was probably under age and required her father's consent. But her father--if it was Elijah--was dead. Her mother could have consented--and if so it might be a separate record at the courthouse. No such 'consent' has yet been found. The record may be missing--or Jemima was older than she later claimed (or remembered). Did Jemima perhaps conceal her real age for any reason? Was she born earlier than 1786? Sometimes women did conceal their real age from suitors. Since there is no record of her mother's marriage to Elijah Harrel it is difficult to analyze this situation.

If Jemima was born earlier than 1786, during the peak of the Revolution in North Carolina (1780's), perhaps her true father was killed when she was an infant. Many of the Harrell men died young during the war and left widows and orphans. Therefore perhaps Elijah was Jemima's guardian--not her father. However no document has been found naming a guardian for Jemima.

In the 1800 census for Person County, NC, George Vaughn is shown as head of household containing females of appropriate age to be Jemima [10-16], but there is also a female [16-26] as well as Sarah [over 45]. They are living amongst several households named Brooks, Barnett, Harrelson, Harrel and Morton.

A Sarah Vaughn was admitted as a member of Bethel Church which is located in the vicinity of the land near the Virginia border and Hico Creek. The Brooks family had given the land for that church. This suggests that Sarah Harrel Vaughn was related to this Brooks family. She might have been the daughter of a John Brooks

Some early records of the Brooks in Orange County:

See Harrel/Haralson/Harrilson Descendants on next page

Other Mortons who served: Justice Joseph Morton was the son of Joseph Morton, Sr., who died in 1753 leaving sons Joseph, Jehu and John. All three brothers served as officers in the Pittsylvania Militia during the Revolutionary War (Pitts. Order Book 4, 343-44). 8

From the DAR Patriot Index:

Other records during the Revolution period:

A cluster of Mortons, Brooks and Harrels lived in the vicinity of Marlowe, Adams and Ghent Creek, in northern Person County below the border with Halifax County, VA. Bethel Church membership rolls further suggest family ties. These names appear: Sarah Vaughn, Clancy Morton, Elizabeth Barnett, Elizabeth Brooks, Susanna Harrel. John Brooks served as minister and gave land for the church. From the date of birth and death for a man named John Brooks, it is estimated that he could the brother of Sarah who was probably born before 1755. See Brooks Family below

NOTE: The name Chaney Molton next to Sarah Vaughn in the Bethel Church Records. If this is actually "Chancy" Morton/Molton, wife of Joseph Morton of Pittsylvania County, this would suggest that Jemima's husband Joseph, was *****Joseph Morton, member of the Pittsylvania/Halifax Morton family shown above.

Joseph and Jemima migrated to Kentucky about 1807 as relative newlyweds. They already had at least one son. Records suggest they migrated with other families from Person County, NC and Pittsylvania County, VA named Pipes, Crane and Beadles in addition to Vaughns and Harrels.

The records of Joseph Morton and his wife Jemima Harrell --and family in Kentucky is fairly well documented with court and census data. Additional data comes from Pike County, Indiana where they moved before 1850.

Joseph's companions in the migration to Kentucky provide many family names with similar migration patterns from places like King William County, Virginia to Lunenburg County and finally Pittsylvania and Halifax Counties, Virginia.

Some of the families seen in Kentucky who came from Virginia are shown below. All are believed related by marriage to the Mortons. Many, such as Cranes, lived in Pittsylvania County but originally migrated from Prince Edward County, Virginia.

Joseph and Jemima followed their children to the area around Petersburg, Pike County, Indiana just prior to 1850. They lived out their lives there. Joseph died Nov. 15, 1855. Jemima survived him by 20 years, dying Sept 13, 1876 at 90. They are buried at Flat Creek Cemetery. Joseph left a will naming his surviving heirs.11

A Brooks Family associated with Harrels

From: Norma Lee Longmire, "John Brooks and Some of his descendants," manuscript, Raleigh, NC, 1962.

* John Brooks may be a contemporary of Jemima's mother "Sarah" --perhaps her brother. The children of John would be contemporaries of Jemima.